For most recent news and COVID-19 information, please copy and paste this URL into your browser https://www.cityoftorranceca.com/

Under the direction of the Mayor and City Council, the goal of the "One Mile, One Charger Project" is to facilitate the expansion of EV infrastructure throughout the City so that an EV driver is never more than one mile from a charging station within the City of Torrance.  The goal has been achieved in 94% of the City and once all future planned stations are completed and brought online, the City will have achieved the goal in over 96% of its area.  City staff will continue to look for opportunities to expand the number of publicly accessible EV charging stations in the City of Torrance. 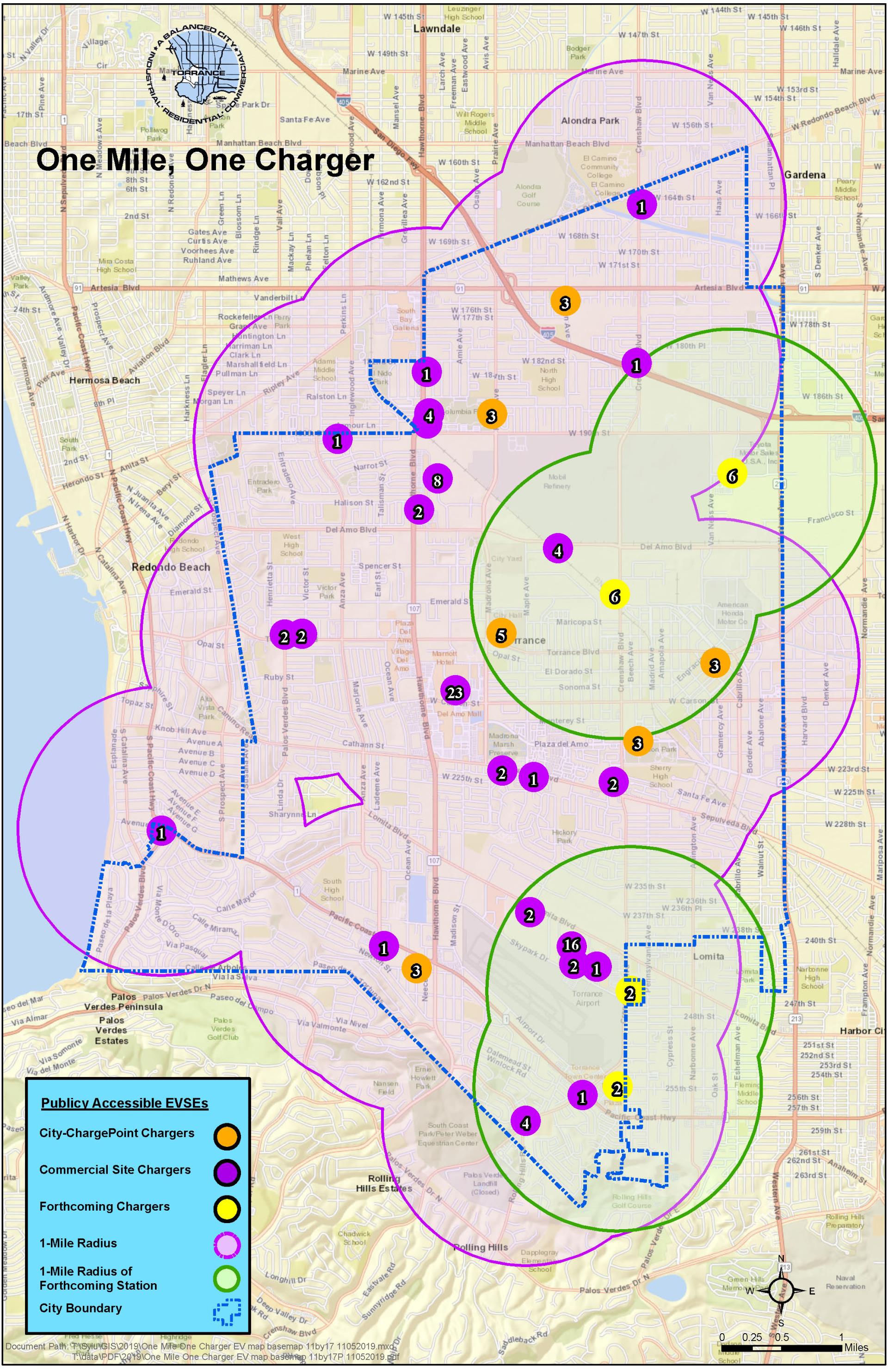 On January 27, 2015, City Council awarded a contract to ChargePoint, Incorporated to install, operate, and maintain publicly accessible EV infrastructure at six public locations.  All six sites (listed below) were fully operational as of May 2016. 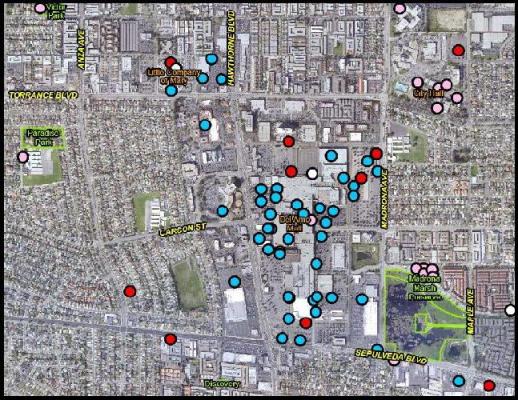 The City of Torrance is currently undertaking an Electric Vehicle Infrastructure study and we need
your help!

In 2008, the Strategic Plan committee was formed by community members from all sectors of Torrance.  The volunteers reached a consensus that "stewardship of the environment" should be a priority, and "using alternative fuels" should be among our goals to accomplish that priority.  The City Council's 2010 Strategic Action Plan included various environmental initiatives, including key performance indicators (KPIs) related to the City promoting, facilitating and attracting alternative fueling resources to and within Torrance.  Also, in 2010, Honda developed the Honda EV-Fit program to further cross-sector collaboration with Google, Stanford University and the City of Torrance.  Each partner had a unique focus within the partnership; Torrance concentrated on facilitating the development of an extensive Electric Vehicle (EV) charging infrastructure throughout the City with a goal of never being more than one mile away from an accessible charging station anywhere in town.  In addition to working internally toward the "One Mile, One Charger" goal, staff also worked with the South Bay Environmental Services staff to facilitate the development of EV infrastructure throughout the South Bay.  By coordinating such activities, staff hoped to provide recommendations for placement, use and operation of the charging units to installers, as well as coordinate functions such as permitting requirements and inspections to best facilitate the EV-movement.

The City hoped to facilitate the development of the alternative fuels sector to promote job creation and lasting improvements to our environment.  Torrance is committed to reducing local Green House Gas (GHG) emissions and the development of alternative fuels is one way of doing so.  Currently, propane fueling is available at various locations in the city, including the City Yard (20500 Madrona Avenue).  Also, the City Yard is an operating Bio-Diesel Co-Operative and a Compressed Natural Gas (CNG) station.  In May 2011, Shell and Toyota Motor Sales USA, partnered to develop and open the City's first public Hydrogen fueling station.  Recently, some gasoline stations have also converted some re-fueling pumps to E-85 flex fuel.  However, at that time Publicly accessible EV-infrastructure was considerably limited given the number of EV vehicles on the road and available for sale.  The Honda partnership, and the relationship the City enjoys with GM as well as Toyota during its time in the City, presented an excellent opportunity to better comprehend the demands for EV cars and EV infrastructure, while also supporting the efforts to reduce emissions and support Torrance's corporate citizens.

City staff developed an exercise known as the "Plug-(P)in Maps" where members of the public could "plug-in" a pin into aerial maps of the city to reflect their preferred location for an EV charger.  This exercise was completed at various environmental functions, such as the 2011 Torrance Environmental Fair and the 2011 Honda Employee Earth Day Fair, with much success.  In an effort to expand the public outreach the exercise was made available on the City’s website, allowing individuals to submit their suggestions from anywhere. The suggestions received were compiled on the map below. City staff reviewed these suggestions and proposed sites for City-owned charging stations that best reflected the public’s interest in the EV charging station locations.  Where higher concentrations of pins were observed, staff was able to note the greater public interested reflected in a particular area or property.

Thank You for your support and input throughout this process!

Link to RFP No. B2014-30 - RFP for Publicly Accessible Electric Vehicle Charging Infrastructure.