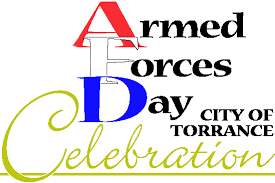 Our nation's men and women of the military forces have defended our country, insured our freedom, and upheld the beliefs and principles that this great nation was built on. Each year, the City of Torrance continued its long-standing tradition in its 61st consecutive year of hosting an Armed Forces Day Celebration and Parade to honor the sacrifices of our nation's military.

The City of Torrance is proud to help honor and thank the men and women of our nation's Armed Forces!