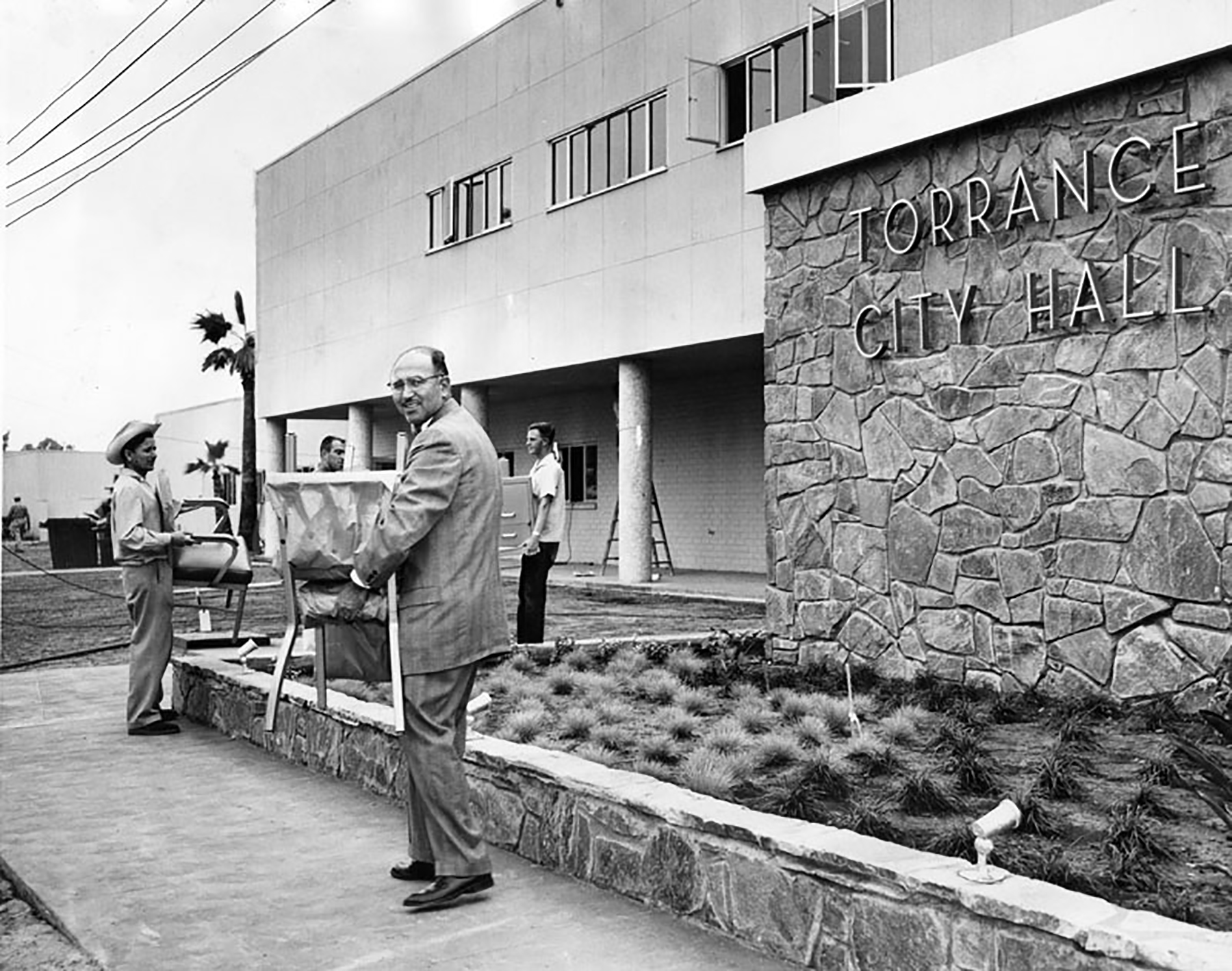 Torrance city officials moved into the new Civic Center in 1956. Mayor Albert Isen helped move furniture to his new offices. The Civic Center as it was then was built at a cost of $1.5 million.

At the end of World War II, there was a major growth surge in Southern California. Torrance returned for a while to much of the pace it had prior to the war. It was a time of continuing vegetable farms, expansion of dairy farms and many chicken and rabbit ranches.

Verburg Dairy was one of many dairies in Torrance. There also were the Meadow Park Dairy, the Hudson Dairy and the Quinn Dairy among many across Torrance during this time period.

Torrance also had been a major producer of commercial flowers. T.H. Wright produced orchids and gardenias. There were also large fields of commercial roses near 182nd Street and Crenshaw Boulevard.

By 1947, Torrance was full of political changes. The small rural population of Torrance adopted a City Charter. The Charter removed the City from the Los Angeles Unified School District. Torrance and Culver City were the last two cities to break away from LAUSD. The LAUSD was not happy, and while it gave up its buildings it took with it all the shelves, fixtures and really anything that moved.

To the south, the Hollywood Riviera’s vacant streets – left from the failed development of the 1920s – looked inviting to new developers of the 1950s. Here were home sites with a view. Part of that view would be the forest of oil derricks still covering much of central and southeast Torrance.

Across much of Torrance were small farms, county roads and isolated industrial or manufacturing plants. Aerials taken at the time give a viewer the feeling of the Midwest rather than a suburb of Los Angeles.

So this is Torrance on the verge of change and development. Torrance was truly a land of opportunity for the coming large residential home builders of the 50s. The residential boom in Southern California suddenly found Torrance.

The decade of the 1950s was one of continued growth out in the suburbs of Los Angeles County.

The Los Angeles area was becoming a strong military-invested economy. The Korean War was again a Pacific-tied battlefield, and the ports of Long Beach and Los Angeles were deeply involved in shipping to Japan and to the Korean battle front.

The region continued to be a strong aero-related research, development and manufacturing base for civilian and military aircraft. This created a solid, well-paid workforce. This manufacturing base combined with other high tech and durable product manufacturing, leading to a very diverse and upward rising economic environment.

The 50s also saw the automobile dominate the region. There was a large investment in new freeways and a transition to a two-car family lifestyle. The region’s Red Cars were disappearing from the scene.

The smog problem identified in the late 1940s became a major issue for the 1950s. In 1947, the County created the first air pollution control program. It began to address the air quality problems created by more than 300,000 backyard incinerators used by residents to handle residential trash. It had to also to deal with the lingering cloud of soot created on cold days by citrus farmers’ use of more than 1 million smudge pots to avoid the frost.

As housing developments replaced the orange groves, these problems would move into Orange County but still plague the air quality of the whole region. There would be further efforts to reduce pollutants from fixed industrial sources. There were early steps to reduce the smog- creating emissions of fuel storage, and steps were taken to begin addressing the emissions produced by automobiles and trucks.

The film industry was fighting an economic battle to survive in the new age of free, over-the-air television. At the same time, all elements of the entertainment industry were consumed in the McCarthy-era hearings and accusations destroying the careers of many of those who were employed in the industry.

The region was challenged to provide schools, utilities and public services to the suburban sprawling population.

During this time, there was a fear of nuclear war in an era of cold war. There were Nike anti-aircraft missile sites built throughout the region. There were duck-and-dive drills for school kids, and many citizens constructed backyard bomb shelters.

Even with a fear of nuclear war, pollution and a changing set of cultural and community values, the region seemed full of optimism and a belief in the California lifestyle. People all over the country got a glimpse of the region with its sunny weather and that lifestyle through the broadcasts of the Rose Parade and Rose Bowl game.

There was a very large surge of owner-occupied, single-family homes. Whole new communities were created. Housing was made affordable through low-cost loans such as the G.I. loan packages available to the World War II veterans and then the Korean War veterans.

The population would increase from a little over 4 million in the 1950 census to more than 6 million by the 1960 census. The communities created by this housing boom were made up of a fairly homogenous population.

Most of the residents were of similar age, had similar life experiences and backgrounds. They had children of a similar
age and were of similar ethnic, racial and economic demographics.

The communities also had a makeup of mostly a single working parent with the mother staying at home. The homeowners had a child-oriented lifestyle which included drive-in movies, the new media of television, Little League, Girl and Boy Scouts, the YMCA and a strong Parent Teacher Association. There also were the various family oriented theme parks which would include Disneyland when it opened in 1955.

Torrance shared these characteristics as it shifted into the 1950s.

Suddenly developers discovered that Torrance had large empty tracts of land; that it was near the beach with year-round moderate weather and that all this was within 20 miles of downtown Los Angeles. Kaufman, Wilson, Watt, Truman Brown and David Hensch, among others, were packaging housing tracts of hundreds of single-family houses.

These were tracts of 200 to 500 homes built almost in an assembly line effort. It began with grading and then with the rough layout of the public streets followed by massive amounts of lumber strategically stacked to allow for the rapid framing of the housing units.

The City required developers to provide street trees, street lights, new roads, needed infrastructure and land for new parks, sumps and schools. Most of the developments did not however provide for fences or landscaping. The new homeowner was responsible for those.

To keep pace with the population boom, Torrance Unified School District was acquiring land from developers and building new schools throughout the City.

The City also saw continued industrial and manufacturing growth with Hi-Shear at Torrance Airport and then Union Carbide building its facility on Hawthorne Boulevard north of Del Amo.

In 1959, Garrett Air Research recycled local flower farms into the research and manufacturing facilities at Crenshaw Boulevard and 190th Street. The company had 1,000 employees.

This was a decade in which Torrance’s population grew from some 20,000 to more than 100,000. Torrance was one of the fastest growing cities in the U.S.

The efforts of the community to respond to that growth and the energy of the new population led to the City receiving an All-America City award in 1956.

During this time, Torrance was resolving a massive stormwater problem. Mayor Isen and the host, Groucho Marx, shared a common Torrance joke on a 1950s game show: “When it rains in Los Angeles, it comes down in Torrance.” Every year saw flooding as rain inundated the City.

Developers were required to build sumps to mitigate the problem. As late as 1957, the seasonal body of water called Lake Walteria would overrun the sumps west of Anza Avenue and cover the area from Lomita Boulevard on the north to Pacific Coast Highway on the south, and from Anza on the west to Ocean Avenue on the east, with three feet of water.

The City acquired land which was made into sumps – large holes in the ground – which held the water. Holding the water in this way kept stormwater runoff from going to already overburdened storm drains. Even with these, the City was storm-challenged.

Only with major storm drain construction over the next two decades was the seasonal problem resolved.

In the middle of the decade, City leaders took the bold step of relocating the City’s public buildings from the old downtown community to a new Civic Center along Torrance Boulevard, between Maple and Madrona avenues.

There was a new City Hall, Police Station and City Pool. Later the County would build a Municipal Courthouse.

This move resulted in the sale of the old City Hall on Cravens to Home Savings and to the sale and demolition of the City Auditorium and Public Safety Building. The City transferred the old Water building in downtown Torrance to the Torrance Chamber of Commerce. Only the City Library stayed in the original center of the City.

In a separate action, the City also built a new main fire station at Crenshaw Boulevard and Carson Street. It was completed in the fall of 1955.