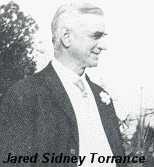 The City of Torrance is located in southwest Los Angeles County in a region known as the South Bay. A municipality with the eighth largest population in Los Angeles County, the City is bordered on the southwest by one mile of beach, on the west by the City of Redondo Beach, on the north by the community of Lawndale, on the east by the Cities of Los Angeles' Harbor Gateway and Gardena, and on the south by the communities of the Palos Verdes Peninsula. The City is part of the greater suburban Los Angeles area. Prior to 1912, Torrance was part of a Spanish land grant belonging to the Dominguez family. The land was largely unpopulated, open, dusty plain. By 1912, a real estate developer from Pasadena named Jared Sidney Torrance had purchased 2800 acres to make his vision of a "Modern Industrial City" a reality. Police services during this period were provided by Los Angeles County in the form of a Constable stationed in Lomita. During these early years, the City's physical layout followed Jared Sydney Torrance's master plan. Along the City's eastern boundary, J.S. Torrance envisioned commercial and industrial zones physically separated from residential areas to the West. The reason for this design was due to the great amount of smoke generated by the City's early industries. Winds blew dependably from the West and generally kept the residential areas free of smoke. Today, this wind continues to provide residents relief from heat and smog.

Free viewers are required for some of the attached documents.
They can be downloaded by clicking on the icons below.