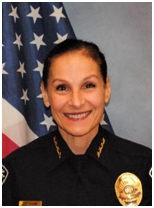 Chief Eve R. Berg began her law enforcement career with the Inglewood Police Department in 1984 after graduating from the LASD Academy.  As an officer, she worked a variety of assignments including: Patrol, Drug Abuse Resistance Education (D.A.R.E.) and Detectives.  As a Detective, Chief Berg became a nationally recognized expert in the area of Domestic Violence and worked assignments in Sex Crimes, Child Abuse, Major Assaults, and Robbery.

In 2011, she was appointed Chief of Police for the Manhattan Beach Police Department and served in that capacity for six-and-a–half years.

In January 2018, she was appointed Chief of Police for the Torrance Police Department.  She currently serves as a member on the California Police Chiefs' Association Law & Legislation Committee and the Training Committee, and is the Los Angeles County Police Chiefs Association's representative on the Los Angeles County Peace Officers Memorial Foundation.  Chief Berg is also a board member on the Governor’s Medal of Valor Committee. Chief Berg holds a Bachelor's Degree in Business from the University of Redlands and a Master of Business Administration from the University of La Verne.

Chief said following her appointment as Chief of Police, “I am honored to be part of this extraordinary family. Integrity, compassion, transparency and ‘Excellence through Teamwork’ will remain our focus as we strive to provide the highest level of service to our community”.