The city that Jared Sidney Torrance envisioned was one that was built even before anyone came to live in it. It was to be a place where people could come and have a job waiting for them. The businesses would be established, the streets in and paved, sewer and water lines underground, houses built and the landscaping done. The Dominguez Land Company, of which he was an officer, created this industrial town as a real estate venture. The site was empty land on the way from Los Angeles to San Pedro. The only connecting road was East Road (now Torrance Blvd.), which ran east to Main Street. 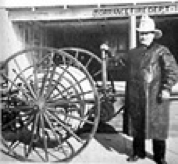 Torrance was officially founded on October 24, 1912. The major businesses lured to this new town were the Union Tool Company (a branch of the Union Oil Company), Llewellyn Iron Works, and Pacific Electric. Although the Dominguez Land Company provided some fire protection, the businessmen realized the need for an organized fire company.

On the night of November 12, 1912, local businessmen met at the tent belonging to D.W. Gregory, the general foreman for the Dominguez Land Company. These men felt that protection from fire was of prime importance to this new community. At 8:00 p.m. that evening, the businessmen and residents established the Torrance Volunteer Fire Department. The first men to sign the roll of the membership were Harry McManus, elected as chief; Al Kirby, hoseman; O.M. Erickson, hydrantman; George Blake, hoseman; Charles Callahan, hydrantman; and D.W. Gregory for a total of seven men. Within two days the ranks had swelled to 40 men. The Chamber of Commerce would act as an advisory board to this new service until the city was incorporated.

The position of chief was an elected one, and from our records we note several men held that title. Succeeding Harry McManus in 1913 was Walter Loucks. Harry McManus then served as the Assistant Chief. The records also show Lewis Smith as Chief in 1916.

During the early years, the old fire company grew as the city attracted more residents. The Volunteer Fire Department was also a social group and it was quite prestigious to belong to it.

The first equipment used by the Volunteer Fire Company was a two-wheeled hose cart with a couple hundred feet of hose, some nozzles, axes and soda-acid extinguishers. These were stored in a little, open shack on the north side of Carson Street where Andreo Avenue meets Carson. To sound the alarm to the residents and the volunteers, a 5-foot diameter locomotive drive rim was acquired. The rim was hung from a tripod next to the shed and struck with a hammer. When J.J. Benner became chief, he had the old rim retrieved from the city dump and built into the rock flower bed at the Headquarters Fire Station at the corner of Carson and Crenshaw, where it can be seen today.

When the alarm rang, the volunteers would show up, grab the ropes and handles of the hose cart and pull it to the fire. The first recorded fire was a hay stack that burned on September 15, 1913

Around 1916 the Volunteers got an old, four wheeled buggy and converted it to carry ladders, axes, ropes, buckets, etc. for this "Hook and Ladder" company. The "Hook and Ladder" was also hand drawn and stored in the shed next to the hose cart.

The first motorized apparatus for the Department was a "Combination" Chemical and Hose Car mounted on a 1919 Model "T" Ford one ton chassis, purchased from the American-La France Company, Los Angeles. The carefully designed body was rigidly constructed and had a capacity of 1000' of 2 1/2" fire hose and a single 40 gallon chemical tank.