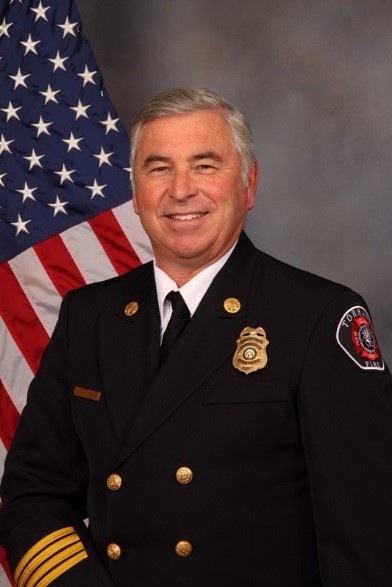 Deputy Chief Dumais grew up in Torrance, California and is a graduate of Torrance High School.  He received his Bachelor of Arts degree from California State University, Dominguez Hills and an Associate of Science Degree from El Camino Community College.

Chief Dumais started his fire service career as a Paramedic with the Los Angeles Fire Department in 1984.  He then spent some time with the Inglewood Fire Department in 1987. Chief Dumais was hired by the Torrance Fire Department in October of 1987. He served his first three years as a Firefighter assigned to an Engine Company and was then reassigned to the Fire Prevention Division as a Fire Investigator from 1990 - 1992.  He then spent the next two years assigned as a Firefighter Paramedic.  In 1994, he was promoted to Fire Engineer and in 1996 he was promoted to Fire Captain.  During his tenure as a Fire Captain, he helped to command two recruit training academies and train numerous probationary Firefighter and Engineers.  In 2003, he was promoted to Battalion Chief supervising the “A” Platoon.  As a Battalion Chief, he served as the program director for Hazardous Materials Emergency Response and Specialized Emergency Response.   In December, 2006, Chief Dumais was promoted to Deputy Fire Chief.

Most recently, Chief Dumais has provided oversight of the Torrance Refining Company, LLC as the Refinery Safety Coordinator. Chief Dumais' mission is to maintain Community safety by providing oversight of the Planning and Coordination of Refinery Operations which impact the Community as well as planning and review of Emergency Operations procedures and to ensure application of local agreements are followed between the Refinery and the City of Torrance. 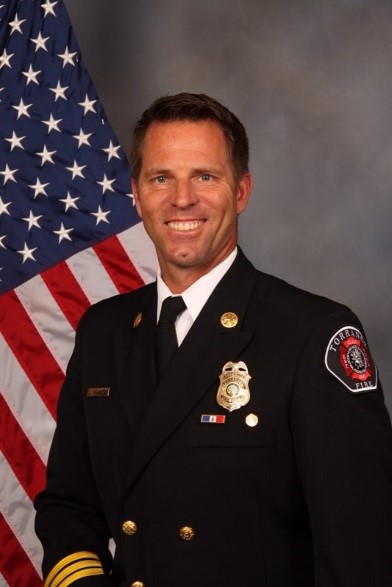 Assistant Chief Carl Besanceney was born in Torrance, California and graduated from Rolling Hills High School.  He obtained his Bachelor of Science degree in Business Administration from Cal Poly San Luis Obispo.  Chief Besanceney was honored in 2000 as a South Bay Medal of Valor recipient for his role in successfully rescuing a mentally impaired youth from a high tension electrical tower.

Assistant Chief Besanceney began his fire service career as a Firefighter/Paramedic with the Gardena Fire Department in 1994.  In 1997 he was hired by the Torrance Fire Department.  He served the department as a Firefighter/Paramedic with training duties as an EMT Instructor, Technical Rescue team member, EMS Clinical Coordinator and High School CPR Instructor.  He was promoted to Fire Engineer in 2001.  In 2004 he was promoted to Fire Captain and assigned to Torrance Fire Station 3.  While serving as a Captain, he worked to provide department training in Wild land response, Structural Firefighting, Document Automation, and Communication Enhancement.  He was promoted to Battalion Chief on August 30, 2008 and served as the Operational Supervisor for all three shifts (A, B, C). Chief Besanceney also provided program direction and oversight for Fire Suppression Services and Technical Rescue Services.

Assistant Chief Besanceney is currently charged with co-managing A-Shift and running the Emergency Response and Training Division.  The Emergency Response and Training Division provides leadership, direction and training for fire suppression, hazardous materials, technical rescue, and specialized emergency response programs. In addition, the division oversees the domestic preparedness, disaster management, health and wellness, and ISO programs.  The goal for the division is to provide training that is current and consistent with the best practices in the fire service community.  The division supervisor represents the department at Area G and regional operations and training meetings.  The Emergency Operations and Training Division is committed to enhancing the capabilities and skills of all members within the operational area.   He is also a member of the Los Angeles Area Fire Chiefs - Operation Chiefs, South Bay Fire Chiefs Emergency Operations Section, South Bay Fire Chiefs Training Section and serves as member of the Region I California Incident Command Certification System (CICCS) Committee. 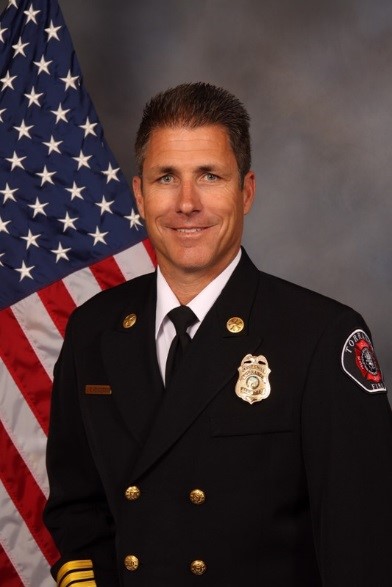 While with the TFD he has worked as a Firefighter, Paramedic, Engineer, Captain, and Battalion Chief.  Chief Henderson has served as the TFD Training Officer, Safety Officer, Hazardous Material/Terrorism Instructor, and has provided leadership and oversight on promotional examinations since 2002.  Chief Henderson has been instrumental in the development of the TFD succession planning by providing leadership in the following programs: Strategic Planning, Community Risk Assessment/Standards of Cover, Fire Recruit Training, Firefighter Mentoring Program, Fire Apparatus Driver Operator Program, Fire Captain Certification Program, and the Chief Officer Development Program. Chief Henderson is a California State Certified Instructor and teaches a variety of hazardous material response and officer development certification courses.. 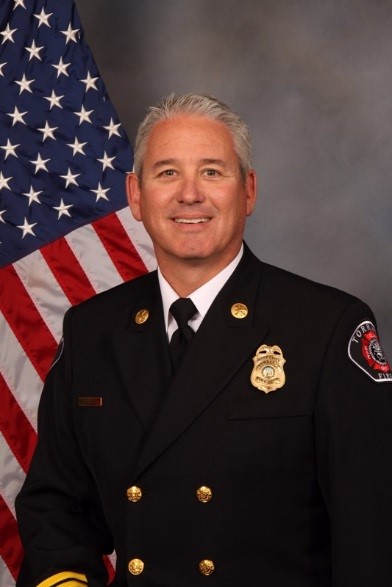 Assistant Chief Miller was born and raised in Covina, California, and graduated from South Hills High School.  After high school he worked as a union carpenter and was a licensed general contractor.  He started his fire service career as a Reserve Firefighter with the City of La Verne from 1994 through 1998.  He attended Mount San Antonio College where he completed his Fire Science course work and graduated from the Fire Academy.  Assistant Chief Miller was hired as a full time firefighter with the City of Vernon in February of 1998.

Assistant Chief Miller was hired with the Torrance Fire Department in February of 2001.  After graduation from the training tower, he served for 6 months as a Firefighter before attending paramedic training.  He served as a Firefighter/Paramedic for three years and was an EMT instructor for the Department.  In that rank, he was also involved in the Apparatus Committee which designed and placed new fire apparatus into service.  In 2005 he was promoted to Fire Engineer.  While operating E-97, he maintained his position on the Apparatus Committee.  After serving as an Engineer for three years, he was promoted to Fire Captain in 2008.  During his years as a Captain, he continued as a member of the Apparatus Committee, was an instructor in Torrance’s training tower, a member of the Fire Suppression Advisory Committee, and mentored many of our newly promoted Engineers and Captains.  He was assigned as Captain of T-91 where he became involved in Technical Rescue aspects of the job and was the auto-extrication instructor for the department.  In 2015 he was assigned as Special Services Captain, which was responsible for Fire Department facilities, apparatus and personal protective equipment.

In January of 2017, Chief Miller was promoted to Assistant Chief and was assigned to the Support Services Division and is now head of the EMS division. 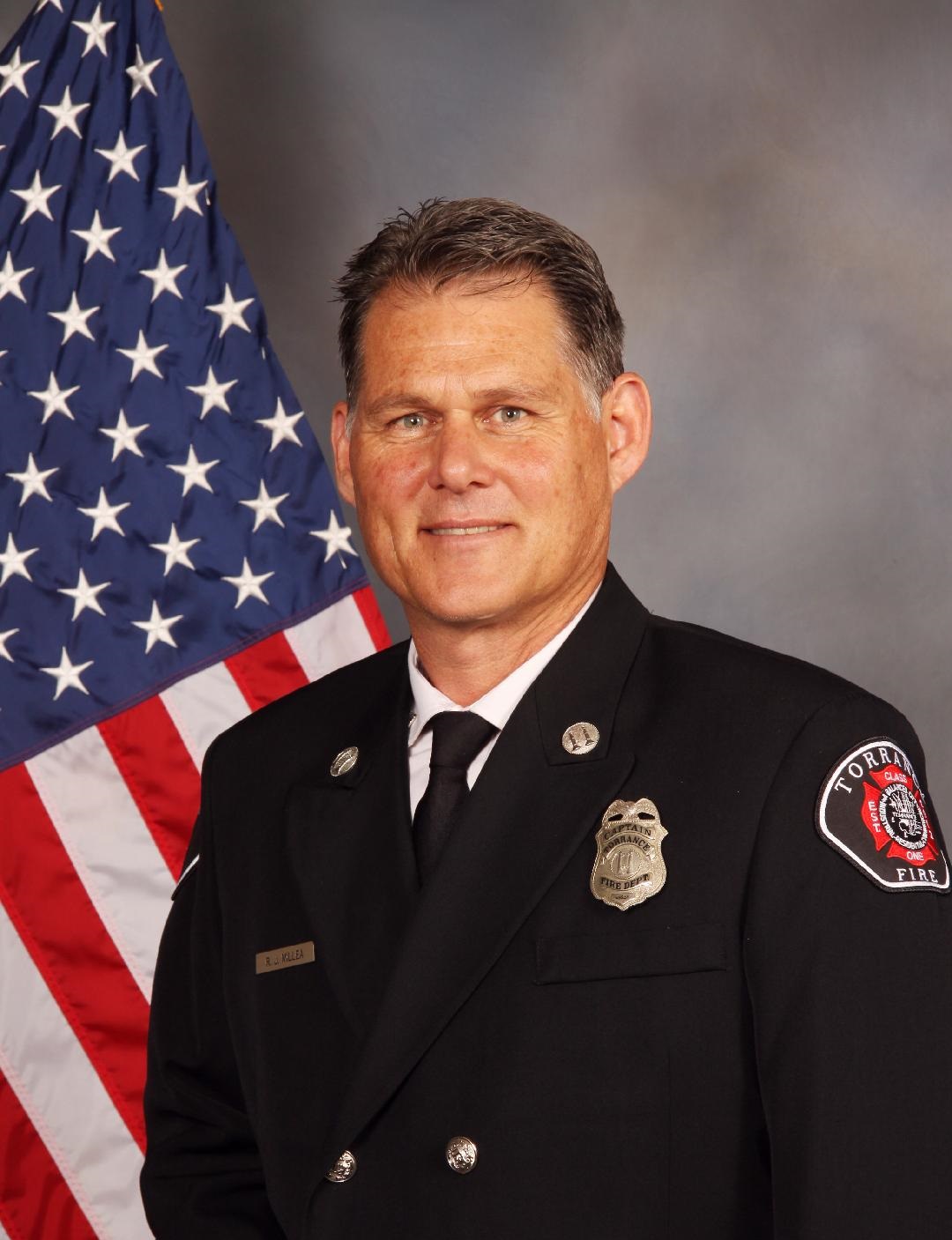 After graduating from Bishop Montgomery High School in Torrance, Chief Millea attended the California Polytechnic State University, San Luis Obispo, where he received a Bachelor in Science Degree in Forestry and Natural Resources, and Alan Hancock Community College receiving an Associate Degree in Fire Science. Prior to joining the Torrance Fire Department, Chief Millea worked for the US Forest Service as a Wildland Firefighter, and as an Industrial Firefighter for Northrop Grumman.  He joined the Torrance Fire Department April 4, 1994. At the TFD he has been an active member; Hazardous Materials Captain, Recruit Academy Instructor, Training Officer, and Public Information Officer. As Assistant Chief, Chief Millea served as the Torrance Fire Department Fire Marshal and is currently assigned to the Support Services Division. 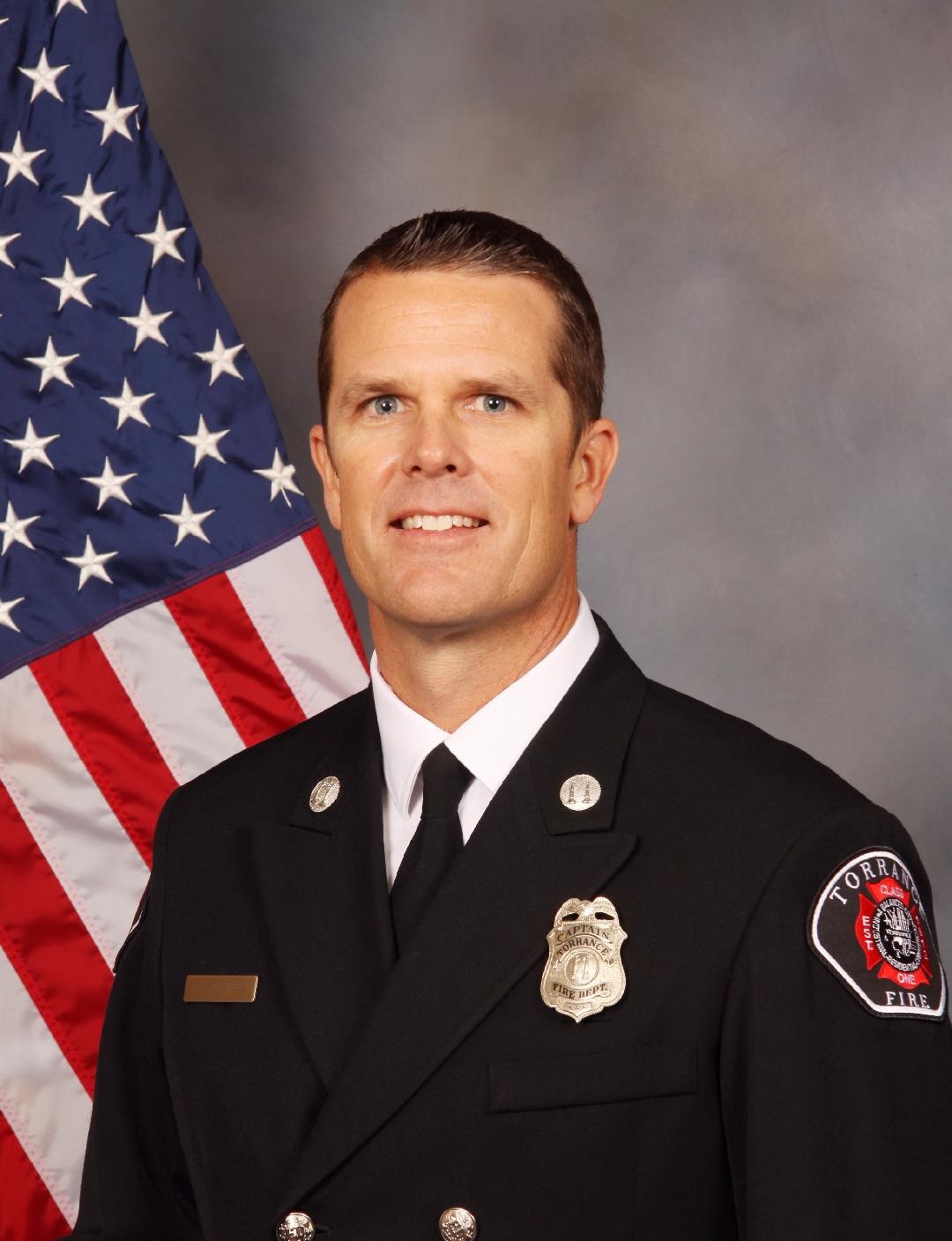 Assistant Chief Kevin Millikan was raised in La Crescenta, CA and graduated from Crescenta Valley High School in 1992. After graduating, he attended Pepperdine University and obtained a Bachelor of Science degree in Sports Medicine.

Assistant Chief Millikan began his fire service career as a firefighter with the Vernon Fire Department in 1998. In 2000, he was hired by the Torrance Fire Department where he has held the ranks of Firefighter, Firefighter/Paramedic, Engineer and Captain. Chief Millikan has been actively involved in the department by developing operational policies as a member of the Fire Suppression Advisory Committee, serving as a recruit academy lead instructor, instructing in firefighter survival techniques, rapid intervention crew (RIC) tactics and wildland urban interface firefighting. He has fulfilled assignments as the department’s Training Officer, Safety Officer and EMS Captain. In addition, he has served as a member of the department’s Peer Support/Critical Incident Stress Management Team.

In January of 2018, after promoting to Assistant Chief, Chief Millikan was assigned to the Support Services Division. Currently, he is leading the Planning Division and provides oversight of the Department’s Strategic Plan, Standards of Cover, Information Technology, deployment modeling, data analytics, grants and legislation. 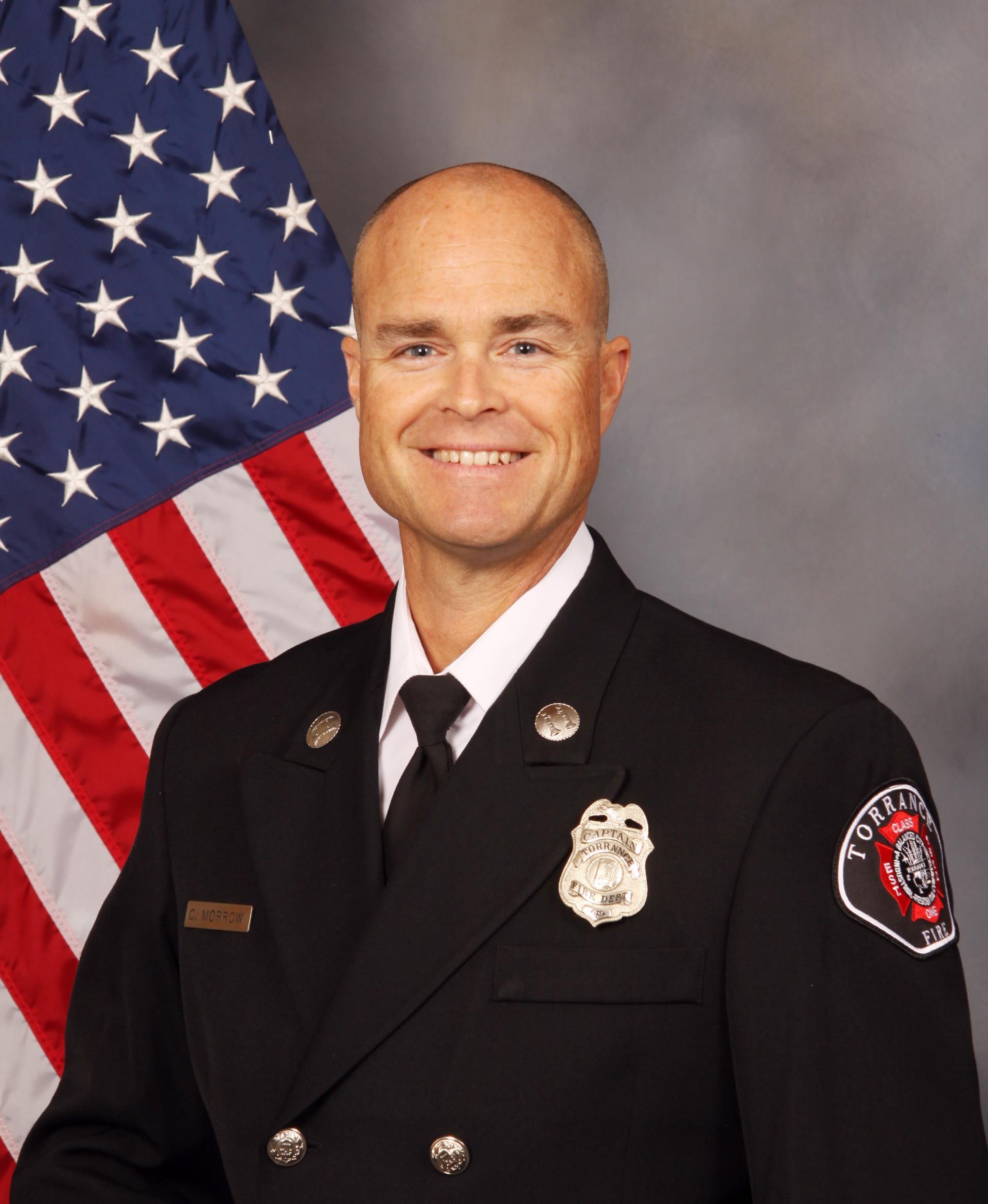 Assistant Chief Chris Morrow grew up in Torrance, California and is a graduate of South Torrance High School. He is currently enrolled in Columbia Southern University and received an Associates in Science Degree from El Camino Community College.

Chief Morrow started his fire service career as a Los Angeles County Fire Explorer in 1992. He then spent some time as a Reserve and Full-Time Aircraft Rescue & Fire Fighting (ARFF) Firefighter and Engineer for the Los Alamitos Armed Forces Reserve Center Fire Department in 1996. Chief Morrow was hired by the Torrance Fire Department in February of 2000. He served his first 6-months as a Firefighter assigned to an Engine Company. He graduated Paramedic School at PTI and spent the next eight years as a Firefighter Paramedic. In 2009, he promoted to Fire Engineer and in 2014 he was promoted to Fire Captain. During his tenure as a Fire Captain, he served as a member of the Fire Suppression Advisory Committee (FSAC), was an instructor at the 2016 Training Tower, and played a lead role in Probationary Firefighter development. In 2018, he served as the EMS Captain and was the lead member in drafting a Measure B Grant Funding Proposal for mechanical CPR Devices to be placed on all ALS units of the Torrance Fire Department. In December of 2019, he was promoted to Assistant Fire Chief in charge of the Training Division.

Chief Morrow has been involved in the recent Accreditation Process by assisting in the development of the Fire Suppression and Technical Rescue Program Appraisals. As the Assistant Fire Chief in charge of the Training Division, he also provides leadership and training for fire suppression, hazardous materials, technical rescue and specialized emergency response programs. He has also been an advocate and lead member of the TFFA/TFD Annual Spaghetti Dinner Event. 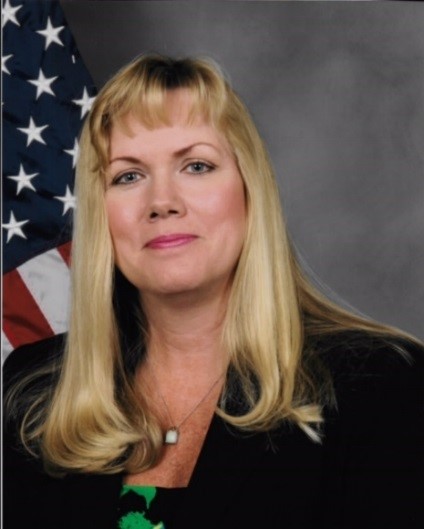 Sally Oliver was born in Orange, CA and raised in Wilmington, CA. She graduated from Phineas Banning High School and began her life as a public servant in September, 1984 where she started her career with the County of Los Angeles. Sally obtained her Bachelor of Science Degree in Computer Information Systems from the University of Phoenix, and her Master of Public Administration from California State University, Dominguez Hills.

Prior to joining the Torrance Fire Department, Sally served as Administrative Director for the General Clinical Research Center at Harbor-UCLA Medical Center where she administered and coordinated all research projects with the LA Biomed Research Institute as well as the National Institutes of Health. Sally eventually promoted to Administrative Director of Graduate Medical Education in the Administrative offices at Harbor, where she managed over 40 residency and fellowship programs that included over 500 resident physicians and fellows.

After 28 years in Los Angeles County, Sally joined the Torrance Fire Department in June, 2012 and serves as the Administrative Services Manager for the Administration Division. Sally is responsible for the oversight of the department’s accreditation program, recruitment and promotional exams, background investigations, budget, injury reporting and follow-up, OSHA and licensing requirements, and performance evaluations. Sally has assisted with the development of several department policies and processes, including the implementation of an electronic performance evaluation system, DMV and health and safety tracking, as well as mandated City policy compliance tracking.  Sally is also responsible for implementing the Administrative Division’s succession planning/cross training program.