The City of Torrance Veterans Memorial is dedicated to all men and women who have given their life in the service of their country during war. The names represented on the wall were Torrance citizens.
Donations accepted. Sponsorships may be available 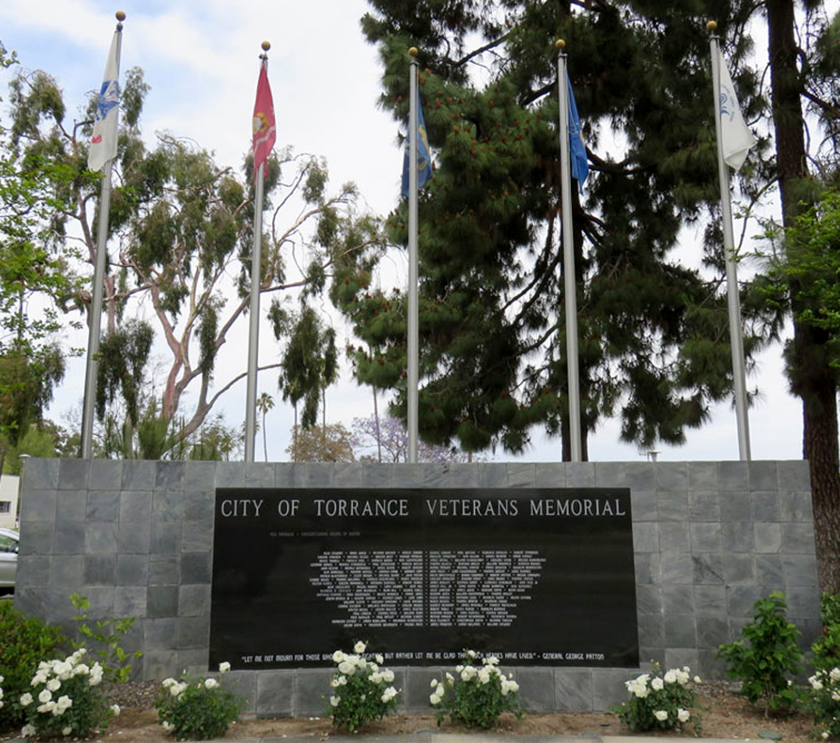 The Veterans Memorial Wall is located at the corner of Torrance Boulevard and Maple Avenue. The names of Torrance residents who died in battle are engraved in eternal remembrance and gratitude for their sacrifice. The City encourages everyone who visits or passes by this memorial to join the Torrance community in honoring all who have served our country and their families. While we are saddened that anyone has to lose their life in armed conflict, the City has engraved a quote on the wall that expresses our deep respect and appreciation of those who served and gave all for their country.

"Let me not mourn for those who have died fighting, but rather let me be glad that such heroes have lived."

A brief history of the Veterans Memorial Wall

The City of Torrance has a long history of honoring the men and women serving in the armed forces. Early in 2001, the City Council expressed interest in the establishment of a veteran's memorial to honor the men and women of the City of Torrance who have died in the service of their country while serving in the military. On June 13, 2001, the City Council ad hoc Veteran's Memorial Committee met to discuss locations, funding and type of memorial that would best serve the community. Selecting the corner of Maple Avenue and Torrance Boulevard, construction began in late January 2002. The project was completed in March of 2003, and on March 19, 2002, the City had a dedication ceremony for the monument.

The Hometown Heroes Military Banner Recognition Program recognizes our community's men and women in uniform who are currently serving in the Armed Forces, veterans who have served in the past, or veterans of the past who are now deceased. See previous honorees, learn more about the program and find out how to apply.

There are many ways to honor veterans. One way is to purchase, sponsor, or lay a wreath through the program Wreaths Across America. Honor a Hero...