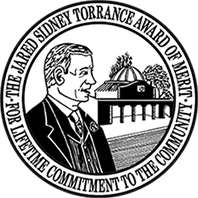 The Jared Sidney Torrance Award was established in 1984.  Recipients are   chosen by the Mayor for their sustained service to the community. Presented by the Torrance City Council, the award recognizes citizens who have served the community continuously throughout their lifetime of leadership and dedication. Past recipients of the Jared Sidney Torrance Award include former elected and appointed officials, and exceptional community leaders who have served our community generously.